BitLocker is a volume encryption tool in Windows Enterprise and Ultimate versions. BitLocker differs from most other encryption approaches since it uses your Windows login to encrypt your data. BitLocker suits for standing against threats of data theft or disclosure from lost, stolen, or inappropriately decommissioned PC hardware.

To learn more about BitLocker, refer to the BitLocker section at docs.microsoft.com.

The Keep BitLocker option is managed on the Select Partitions step of an image-based backup wizard. 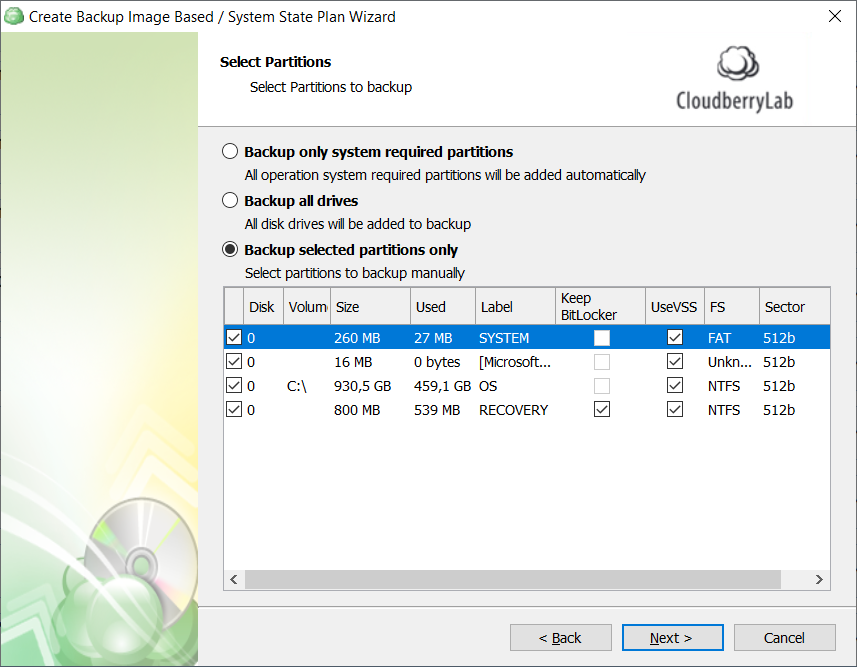 Note that if you have system partitions encrypted with BitLocker, it is highly recommended not to use the BitLocker encryption to back them up. Instead, you can use the built-in encryption of Backup for Windows.

This recommendation comes because image-based backups can be easily corrupted if a partition is BitLocker-encrypted. For these partitions, VSS (Volume Shadow Copy) is not available. This can cause the following issues on restore: the operating system may not start properly and result in a BSOD message BAD_SYSTEM_CONFIG_INFO

For volumes that are not BitLocker-encrypted, the Keep BitLocker option is unavailable.

Note that the Bitlocker-encrypted partition backup dataset contains the whole partition and includes free space. For example, 2 GB partition with 50 MB occupied space will be of 2 GB size on backup storage. On the drawing below, the latest backup (with the 53 MB Size on Storage value) is with the disabled Keep BitLocker option and the previous backup (with the 1,95 GB Size on Storage value) is with the Keep BitLocker option enabled.

If you deselect the Keep BitLocker check box, the volume will be backed up decrypted.

The decryption does not happen automatically, MSP360 Backup only performs checks of volume state. You have to provide one of the decryption credentials on the Windows side

If you restore a BitLocker-encrypted volume that had been backed up 'as is', with the Keep Bitlocker option enabled, the volume will be mounted to the specified location without any changes.

If you restore a volume that had been decrypted before backup, it is restored as follows:

To view the contents of the BitLocker-encrypted volume on backup storage, select it, then specify one of the credential types to unlock the volume: